My wife Claire has the dubious honour of being the oldest women in the world to have Juvenile Granulosa Cell Tumour (JGCT), a very rare form of ovarian cancer.

I’ve been involved in sports since childhood. Initially it was swimming at club then state and national level in surf lifesaving. I played Rugby Union during winter, swam and surfed all year round and competed in surf lifesaving during summer. An active childhood and youth. Later in life I immersed myself in masters swimming then triathlon winning several state age-group titles in long course. In 2005 I won the 50-54 yr age group National Ironman championship that qualified me to fulfill my long held dream of completing and competing in the Hawaii Ironman. It was during this time that my love of road racing and cycling took hold. Easier on the aging body, social, and very good for the head being out there early mornings and enjoying the rhythms of riding.

After graduating with a Health and Physical Education degree I taught PE for 6 years in Ipswich, Longreach and the Gold Coast. I then went back to Uni and completed a PhD in Sport Science, my lifelong passion. I then embarked on an academic career teaching and researching at The University of Queensland (6 years), Central Queensland University in Rockhampton (20 years), and Bond University (5 years) where I recently finished my career as Professor and Head of Exercise and Sport Science.

Claire and I have two children, Rebecca (29) and Megan (26), both happy, healthy, confident, and well-adjusted young women. 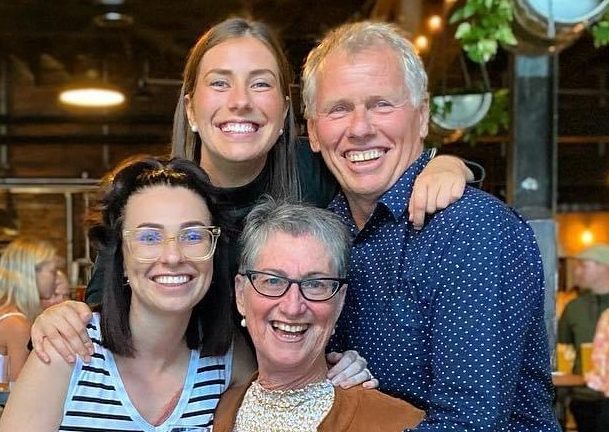 Life throws curve balls at us. Claire’s diagnosis with Rare Ovarian Cancer (ROC) in 2014 took us by surprise given we lived a very active and healthy lifestyle. We learnt quickly that nothing is known about Claire’s JGCT. Retirement has given me time to put my love of fitness and cycling to a positive cause. Riding for Research with great support of ROC Incorporated (ROCInc), raising awareness of Ovarian Cancer in females, and helping Claire, my wife of 34 years and mother of our children.